People often ask whether Katie’s ingestion of radiation from the Millstone and Indian Point nuclear power plants has had an effect on her health or the health of her progeny.

Sadly, we can answer now that we have no doubt that Katie’s exposure to the carcinogenic radioactivity released by these nuclear power plants triggered her aggressive cancer. Katie’s soft-tissue sarcoma is medically associated with exposure to the radionuclides routinely released to the air and water by these dangerous nuclear facilities.

We share other sad stories as Katie battles her cancer.

While living five miles northeast of Millstone, Katie gave birth to twins, Cindy-Lu and Joe-Joe, both apparently healthy and robust, superstars in their good looks and personalities. Cindy-Lu has given birth multiple times since she moved to Redding, Connecticut, with Katie in 2007. Cindy-Lu is thriving, although her milk has also tested positive for radioactive strontium.

Katie has given birth to two baby girls in Redding, Johanna (named for the brilliant and beloved veterinarian Dr. John Caltabiano who saved Katie when she had life-threatening mastitis), and LuLu. 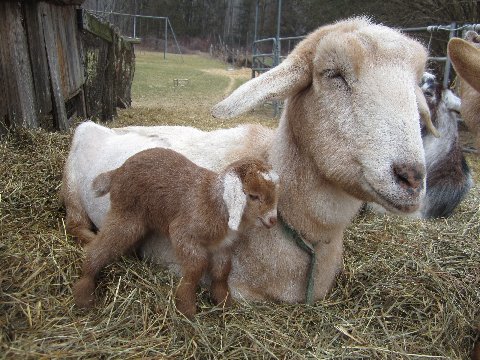 Johanna brought profound joy to Katie. She was beautiful and sweet-natured. Katie adored her. Having Johanna restored Katie’s youth and gave her new purpose. Johanna appeared to thrive in her first week of life, feeding on Katie’s white gold. But Johanna developed discomfort and the cause was soon discovered: Johanna was born with a birth defect. She had no anus. A goat baby will absorb its mother’s milk into her tissues and not excrete waste during the first few days of life. That is one reason mother’s milk is considered a perfect food for a baby. But before too long, Johanna’s waste was beginning to clog up inside her. Johanna died en route to Tufts Veterinary Hospital where emergency surgery was scheduled to create an artificial waste channel. Dear Johanna was a heartbreaker, her loss a crushing blow to Katie.

Katie tried again, giving birth to the pretty LuLu, who was a spitting image of Katie’s daughter Cindy-Lu. Lulu also thrived at first, gorging on Katie’s big supply of rich milk. She frolicked with her baby goat cousins, darting across the meadow at high speed, climbing fallen logs to reach sweet leaves, but after a while she couldn’t keep up. She became frail and delicate, suffering symptoms of a weak heart. Katie couldn’t rescue her. Dear LuLu was a heartbreaker, her loss terrible to face.

Developing fetuses are most vulnerable to radiation exposure. Radiation causes cell mutations and birth defects, including digestive tract aberrations and heart defects. Following the Chernobyl nuclear catastrophe in 1986, so many babies were born in Ukraine and Belarus with a common, potentially fatal, heart defect that the condition became known as “Chernobyl heart.”