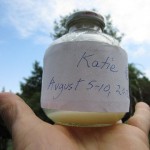 It was a year ago today that Katie the Goat succumbed to an aggressive cancer that invaded the organs in her chest.

Katie’s dread disease attracted notice because for years she had served as the nuclear industry’s poster goat for radiation poisoning. Her goat milk tested super-high for strontium-90, a carcinogen that mimics calcium and invades bones and disrupts the immune system, causing a variety of cancers and leukemia.

In the late 1990s and early 2000s, Katie grazed in a meadow nestled five miles northeast of the Millstone Nuclear Power Station in Waterford, Connecticut, a neighborhood riddled with cancer.

Millstone’s owner, Dominion, carried out an environmental sampling program that included Katie. Dominion’s technicians regularly collected Katie’s milk and tested it for traces of radioactivity. Millstone, in common with all nuclear power plants, routinely releases radioactivity to the air and water. The airborne radiation is carried by the wind and precipitates out in the rain, landing on field vegetation and seeping into the groundwater, i.e., Katie’s food and water supply.

The readings were staggeringly high. In fact, 55 picoCuries/liter of strontium-90 was twice the highest level found in cow’s milk sold commercially in Connecticut during the peak of atmospheric nuclear weapons testing in the 1960s; since then, strontium-90 levels have diminished to very low levels, less than 5 picoCuries/liter nationwide.

Neither Dominion nor the Connecticut Department of Environmental Protection made any effort to publicize the frightening news about Katie’s milk. (On August 6, 2013, the U.S. Nuclear Regulatory Commission revealed that in April Dominion withheld from the NRC the fact that Millstone’s main radiation stack had become inoperable, a violation of federal regulations. The NRC called the breakdown “a major loss of emergency assessment capabilities.”) Activists challenging Dominion’s effort to obtain a 20-year license extension for Millstone discovered the buried data in a search of company records.

Katie, with her two suckling kids in tow, headed to Hartford to meet with the Governor to share her numbers. Katie’s visit to the manicured grounds of the Capitol attracted a huge news media outpouring but the Governor, though a breast cancer survivor, would not meet with her.

Enter Gina McCarthy, then head of Connecticut’s DEP. Pressed by the news media, the Governor reluctantly directed McCarthy to investigate and prepare a report explaining why Katie’s milk had high levels of radioactivity.

In short order, McCarthy released a glitzy report full of expensive graphics – very unlike most reports issued by staid, cash-bound state agencies – and a press release.

McCarthy acknowledged that finding high levels of radioactivity in a goat’s milk in Connecticut was a serious issue. (After all, people drink goat’s milk, too, and cows graze on pastures just like Katie’s. Not to mention that people breathe the air just like Katie and eat vegetables from garden patches and that human children are the biggest milk drinkers of all.)

Facing many uncertainties, McCarthy could render only one conclusion with certainty: Millstone was not the cause of the high levels of radioactivity found in Katie’s milk.

“It is clear from our study that Millstone was not the source of the radioactive materials in the two goat milk samples being questioned,” McCarthy’s press release assured.

Well if it wasn’t Millstone, what was it? McCarthy didn’t venture to say.

Activists trounced on the report; two separate radiation experts dismissed it as junk science and repeatedly asked to meet with the authors of the report to set them straight. McCarthy refused access. DEP has purged the report from its website.

McCarthy’s gift to the nuclear industry – absolving Millstone of any role in contaminating Katie’s milk with radioactivity – paid off. The ambitious bureaucrat, taking care to donate $1,000 to the Obama 2008 election campaign, found herself nominated to head the U.S. EPA’s Air and Radiation Bureau by the new President. At her confirmation hearing, the only time the word “radiation” came up was when the title of her new job was mentioned.

When the Fukushima nuclear reactors began exploding, McCarthy found herself in charge of the EPA’s national network of radiation monitors. Panicked, she sought emailed assurance from an EPA staffer the morning of March 12, 2011:

“I spoke with Lee and she has it together. She indictaed [sic] that at this point there doesn’t seem to be a significant release and she reminded me that the US did not have to take any protective action with Chernoble [sic] – even though that was a much more extreme situation,” McCarthy emailed, misspelling Chernobyl.

A year later, EPA’s internal investigator, the Inspector General, issued a scathing report taking McCarthy down for the abysmal state of her Fukushima air monitoring network: one-fifth of its volunteer-run monitors were broken during the early days of the crisis. As head of EPA’s Air and Radiation Bureau, it was McCarthy’s decision to shut down the air-monitoring system just a few weeks into the crisis, even after it detected Fukushima fallout in the rainwater in Hartford, Connecticut and cow’s milk in Vermont. (Meantime, troubling uncontrolled radiation releases continue today to spew from the Fukushima