On Tuesday, August 7, 2012, Katie’s health took a decided turn for the worse.

Katie has been battling mightily since February, when she got her diagnosis of aggressive soft-tissue sarcoma in the left shoulder, with a large tumor wedged between her lungs.

Katie put herself on an anti-cancer diet. She eschewed the commercial grain put before her – the sweet molasses-based mix that goats get hooked on. Eventually she turned her nose up on store-bought organic veggies – beets, carrots, broccoli – and even home-grown kale, dandelion and collard freshly picked from the garden. She seemed listless at feeding times.

That was, until her plate was filled with just-picked sweet grasses, wild vines and select weeds. Katie would suddenly become animated, lift up her head and devour these offerings with ferocious abandon. If her family of goats approached to share in the goodies, she’d bounce them away with a thrust of her head.

But Tuesday, August 7 was different. Katie was oblivious to most everything. Food of any kind did not interest her, she would not drink cold water and she lay in a deep slumber for hours and hours and hours. Reassuringly, she lifted her head slightly at the sound of a recognized human voice. She became more deeply unresponsive as the time passed, but did keep flittering her tail to shoo flies away. Katie has no words, but she spoke volumes, poetry really, when she resisted having her hooves groomed while in this state by kicking her legs a few inches above her bed of hay. Katie has always resisted having her hooves groomed and she gave hope with this form of communication. All day long and into the night, Katie was behind-the-ears-scratched, brushed from head to toe, sung too, whispered to, talked to, and loved.

But it did not seem she would last the night.

But Kate is a miracle goat. Waking to a beautiful day, Wednesday, August 8, she lifted her head on the sight and sound of her caretaker.

Katie had come back!

Life was still good. Katie’s strength and resilience were thrilling.

Katie had had nothing to eat or drink the previous day.

She had to be re-introduced to it slowly.

Within her sight, her most favorite delicate invasive vine with tiny clusters of pink flowers were plucked and put before her. Tentatively, she took a sniff, then rested her head upon her pillow of hay. She was worn out. A bouquet of sweet grass still covered in dew was presented to her. Katie tried and tried, but couldn’t bring herself to taste these delectable medicinals. Until she couldn’t resist and she was back chewing again!

Her plate was heaped higher. Katie’s head was down, she was exhausted.

Up again, she dipped her tongue in the cool fresh water for the first time.

It was Katie’s signal she was ready for a feast of love.

The clippers were brought out and Katie’s favorite hedge – a target forbidden to the goats under an impossible-to-enforce policy – yielded a leafy branch. Down came the wild grape leaves. Slices of organic Granny Smith apples were added.

Katie went to town. She tucked into her banquet of love.

Katie did come back! 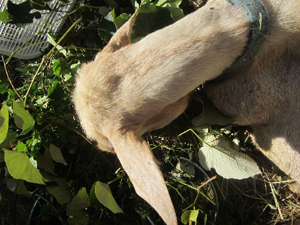